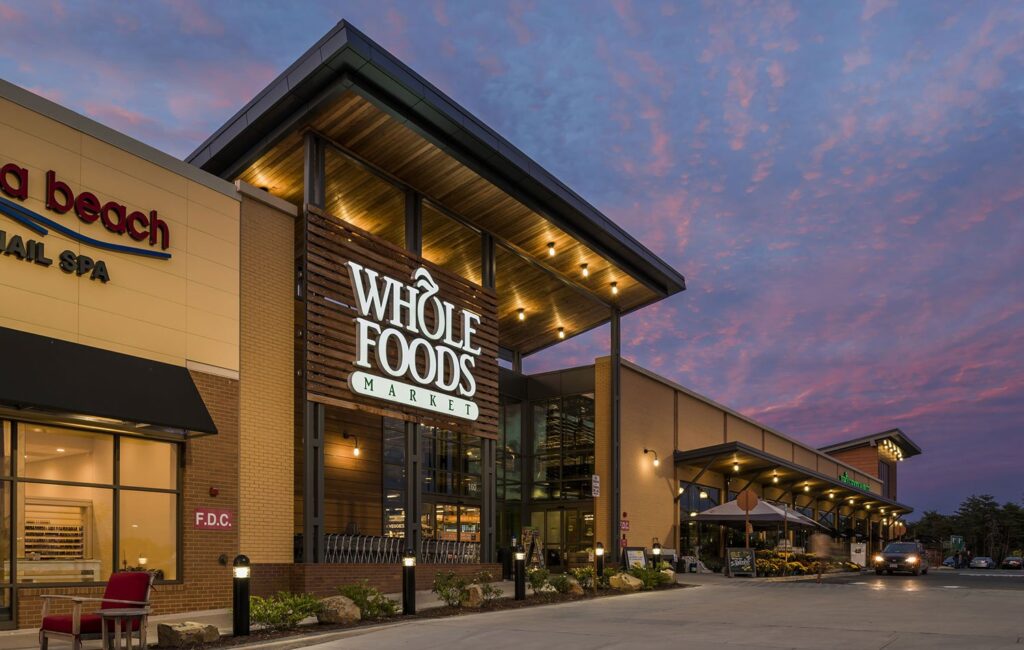 What is happening in the retail space given the high interest rates? Are national tenants still leasing at the same speed as last year? What are some things to keep in mind when negotiating a lease in today’s environment? James Chung, founder of the econic company has 20 years of experience in the retail leasing space and shares his insights.

Tell us a little bit about you.
We started the econic company in March of 2021, I left Cushman and Wakefield after a very happy career with them close to 20 years, and decided to be an advocate for the second half of my career, and try to curate and be purposeful with how I wanted to participate in the industry. It’s been a very humbling journey in a positive way, all my clients when given notice were gracious enough to want to come. We do a lot of institutional work, both on the tenant side and the agency side, and have been off to the races since day one. We control a little bit over 90 million square feet in the greater Bay Area, and work with over 100 national and regional tenants from big box tenants down to shop tenants. We are a company of nine currently, but are looking to grow not with the purpose of growing quantitatively, but more qualitatively. We really hold our ethos and our standard near and dear to our hearts.

What is the state of retail and leasing with national tenants in California, in the Bay Area in particular?
From a velocity point, the market has actually stayed pretty high. And I think that would be very shocking for people to hear especially coming out of COVID. However, what was interesting is that we found that, like what happened during the financial crisis in 2008 and arguably during COVID, the Bay Area, because of its fundamentals, is usually the last to fail and the first to recover. And because the barrier to entry has always been so high a lot of national tenants and local tenants, when they see opportunities that were never available historically become available, there becomes a classic supply and demand situation where the opportunities unfortunately are less than the demand. We’ve actually seen in the better shopping center environments, and when I say that I mean, strong neighborhood centers with grocery anchors, well positioned power centers, there has been almost an increase in demand for those opportunities, especially for second gen food space. So there has been a lift, believe it or not in occupancy costs for those premier opportunities.

What do you think the plan will be for that kind of space? I know there has been some talk about residential, potentially. Do you think the cities are open to that?
What we’ve seen along those lines are a lot of alternative uses that are being proposed and introduced. We have seen things like large pharma medical enter into retail environments where traditionally they would have never done so, we’ve seen industries like auto want to get in, pivot to more traditional retail environments, rather than stay in an auto row environment. With the onset of all the EV cars coming into the market, there are many new brands that are looking for showrooms and even sale centers, or service centers. What’s great about that new segment is that they do not expose the projects to hazardous materials, because they’re not changing oil. They’re not fixing engines, they’re fixing batteries at the end of the day. It’s evolving, and it’s going to continue to evolve. My guess is that there will be a return of that demand in the larger format sector sooner rather than later. I think that out of COVID people are rethinking their execution plans and sizes. And that trend started pre COVID, as we saw a lot of what we called right sizing, those that realized they didn’t need as much space as they thought. But as that continues to evolve, I think at some point in the near term we will see a return of a lot of those tenants back into that larger format space.

To clarify, you see these new types of tenants coming, not the tenants that left, like Sears, correct?
I don’t think it’s going to be the legacy tenants like this Sears and JC Penney’s of the world, but it’s going to be an evolution of that, so there could be tenants that may pivot and pursue larger opportunities for different verticals of their company. Whether that’s companies like Amazon, or larger format grocery stores that are creating these hybrid food hall grocery store environments. It’s a constantly changing environment and ecosystem, which keeps it exciting. But overall, on a national basis, the vacancy rate is just a hair under 6%. We’re looking at about a 5.9% vacancy rate nationally. In metros like San Jose and San Francisco, they’re lower than that. We’re looking at about five and a half percent in San Francisco proper, which, pre COVID, was one of the lowest in the nation, hovering closer to 3%.

There’s been an influx of inventory in that environment, but in San Jose, it’s actually down to 4.3%. And that is, I think, more of a reflection because the San Jose major metro is actually much more inclusive of a larger trade area. So while we do have a traditional downtown, it’s really made up of more of communities around that downtown that are in the form of more traditional retail environments. And when I say that, I mean those power centers and grocery anchored shopping centers, where people continue to spend money. But in San Francisco, in particular, and in San Jose, and truthfully, in Silicon Valley, and really all over, I think the headlines that everyone reads every day are really impacting the rebound and return of retail in those more daytime centric environments. And when I say that, I mean downtown San Francisco, and downtown San Jose. In fact, in downtown San Francisco, I think the office market is still heading towards the trough before they go back the other direction. There are 1,300 leases that are coming due in 2024 while people are not even back in the office full time yet. I think a lot of companies are rethinking about how they are going to house their employees and more importantly, where. With Amazon and Meta layoffs, that is only going to reduce their requirements, and also require them to rethink how they’re utilizing their existing environments.

Our company is a little bit more driven geographically than it is by market. We have coverage all throughout the nine Bay Area counties.We have projects, as far north as Santa Rosa, all over the East Bay, South Bay, Peninsula. When we do our tenant rollouts, we’re rolling them out throughout the Bay Area counties, so we’re touching a lot of geographies. Unlike office or industrial where a lot of brokers focus on a sub market, retail is really more driven by intersections and by shopping center opportunities than it is by working just in the South Bay.

What do you think owners should be doing to prepare for the next couple of years? You did mention that leases are still very competitive, do you think they might go down a little bit?
I think it’s important to think long term, not short term. And the knee jerk reaction with the current headwinds of inflation and interest rates rising is to transact differently. While inflation is 100% real, and CPI is at an all time rate, a lot of landlords were reacting by trying to be hyper aggressive with annual increases, redefining how transactions are put together. And while there is merit to that, and it does need to evolve, I think it’s also about securing a tenant today for the next 10, 20 years, and working in partnership with them in finding a solution for a healthy ratio and occupancy costs for that tenant. And while that description is not a one size fits all, the complexion of a transaction for a small restaurant tenant versus a 50,000 foot box tenant are completely different. Overall, it’s planning for the next 10, 20 years and not the next five years. And the challenge is too though, everybody’s facing inflation, it is very difficult to underwrite the uncertainty of the future. While the question came from you about how property owners should prepare for that, that same question could also be applied to the tenants.

how the transactions are created, especially when it comes to how you’re defining, for example on an option, how fair market value is determined, and what that floor and ceiling should be. Because if we continue at a 9% inflation rate the value of that dollar in 10 years is not going to be equitable to what it is today. So it’s important that the tenants are also mindful and thoughtful of how that transaction is put into stone today. Unfortunately we’re in this zone of uncertainty, if you will. But it’s about giving latitude from both parties to make sure that a fair transaction can evolve through time.

Is there anything else that we should have covered with that in mind, this topic in mind that we haven’t covered?
As a broker, we are always cautiously optimistic, but I would say that no one should be hitting the panic button. Business cycles are natural, they are going to happen and continue to happen for the rest of our careers. And I think it’s important for people to not overreact and just take the opportunity today as it is. And be thoughtful about the other side of the table. When people can do that, fair transactions will be made, but because of where we are geographically, we’re going to see growth over time. And we always will. This is arguably a moment in time, and it’s one where all of us are trying to adapt in real time. And no one has a crystal ball. But ultimately, whether it’s 12 months or 18 months, which historically a recession could last, it still can’t be worse than what we just went through, which was COVID where the world came to a complete halt. I think this is part of the exhaust from from COVID as far as some of the negativity and fiscally, how the global economy is reacting. But, ultimately, I’m a firm believer that things will be better than they were before. And the bear will continue to thrive, as it always has. And I’m excited to see what happens in the next 24, 36 months.

Are you hiring leasing brokers? How are you planning on expanding your business?
Growth has never been part of the business plan as it relates to quantity. However, we are always looking for strategic partners who share our ethos and standard. And that’s one that we like to think is very high. When architecting the initial business plan, the focus was around how to redefine how retail brokerage has been executed, at least in my career. And while I learned many things, from many people, from many mentors who I respect, that taught me a way to do things, I also saw many things that I didn’t like, and I’m focusing on both equally to create a culture here at the econic company where people can ultimately be the best versions of versions of themselves, whether that’s personally, professionally, or socially. And it’s one where we continue to strive to provide a better service, never focusing on the fees, but on our quality of execution on the day to day because ultimately, the results always follow when you are unwavering with that standard.