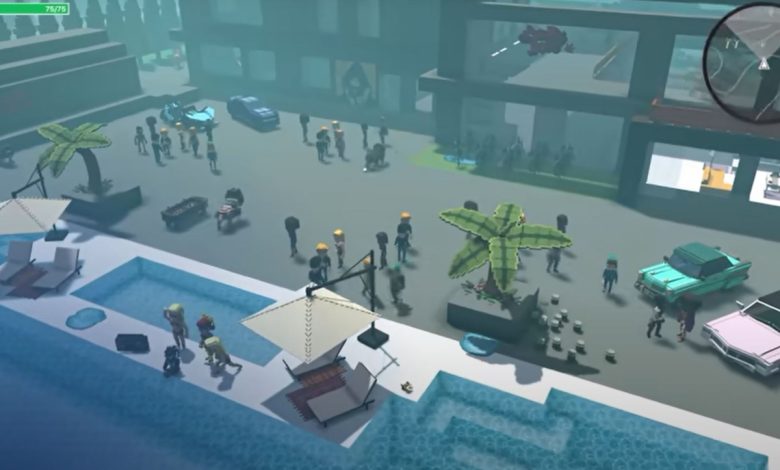 Let’s say Facebook decides to create their own universe, how are these pieces of land going to merge together? Or not? How will that work? What if one planet becomes more popular than another planet?
That is the trillion dollar question. Are these going to be interoperable with each other? Is one going to dominate? That remains to be seen. We’re still so early with this new world that nobody knows. Personally, I’ve bought virtual real estate in the Sandbox, Decentraland and Netvrk. And I’m looking to invest in virtual estate in up and coming metaverse projects as well. There’s a saying, Spray and pray, I’ve kind of adopted that strategy, but not quite. I’m doing a lot of research into these projects, and I’m exploring them, but I am looking to get a lot of exposure to it. Some people compare it to being able to go back in time and buy a city block in Manhattan 100 years ago, what would that cost today? What would the return on that be worth today? It would be absolutely astronomical and, and incomprehensible. I think it’s very possible that we’re looking at a similar opportunity now, where in a decade or two decades, we look back, and we could have acquired a land plot in the Sandbox or in Decentraland for only $15k-20k. And now it’s, millions of dollars.

You can also purchase in game assets in the Sandbox and Decentraland. You can also create them, I believe. Roblox allows you to do something similar. I haven’t played it myself, but it might be something that some of your listeners are more familiar with, especially if they have young children that play Roblox. They provide you with tools to create your own anything in game assets, it could be a sword, a speedboat, a palm tree, a desk, a bed, pretty much anything that we have in the real world you could create it in the metaverse and you can sell it.

So we can create for free or do we have to pay to create it?
Good question. I haven’t gone down that path yet, I can’t say for sure. That’s a great question. I’ll I’ll have to get back to you on that. I believe the software to create is free to download, but because they exist as NFT’s I believe you’re going to have to mint them onto the blockchain, which costs money to mint to the blockchain, to mint NFT. I think that’s going to be the initial cost with the minting process.

Why is location location location important when you can literally click a button and be transported to the other side of the planet over there? Are people “walking” in these universes and is that why they will be able to see Snoop Dogg’s neighbor?
Yes. There are various ways to move through these Metaverse projects, there are portals in some of them where you can teleport your avatar from one location to another. However, those are in specific locations only. So there are going to be large stretches of land between portals, where you’re going to have to find alternate means of moving around. The obvious and most common one would be walking or running. There are also roads, you can buy cars. I’m guessing you could move around the metaverse faster by purchasing a virtual car.

You don’t click a button and you’re somewhere else right now?
In Decentraland, I believe you can enter coordinates into a search bar, and it will teleport you there. That’s why the premise on location, location, location, let’s say they teleport to Snoopverse. If you’re one of his neighbors, people are naturally going to be walking around Snoopverse, they want to explore the whole area, maybe the surrounding area, and they’re going to run into your property versus if you’re 100 parcels away from Snoopverse, there’s no reason for people to go there. Unless you build something extraordinary, then people are going to want to go there, too. So that is different from the real world. Obviously, teleportation technology doesn’t currently exist as far as we know at least, but maybe one day, who knows. But I think in the Sandbox, which is still it’s in its alpha stage, so you can’t explore it yet totally, they are going to have portals, I’m not sure that you’ll be able to enter coordinates and then immediately teleport to them. People are going to be buying virtual cars, I have a virtual car in Netvrk, I have a virtual motorcycle, a virtual off road truck. I’m planning to lease those out to people. I can flip them for profit, or I can lease them out for passive income.

I’m sure people are tripping a bit right now, as they’re listening to this, at least I am. But there is a really good video that Mark Zuckerberg did, a 1.5 hour video, it’s a really good way to wrap your head around what is really happening there and what will happen. As Paul alluded to earlier, talk to your kids, don’t talk to us old people that would actually go out there with our own real shoes in the real world. Really try to understand what is happening in their world and what is interesting to them. But right now, obviously there are some downsides as well, there are no tax incentives, no lenders out there, you’re going to have to upfront the entire investment, it’s still a little bit different than real estate. But on the other hand, also no decaying roofs or having to deal with a management company, or whiny tenants. No insurance necessary. It’s fascinating. I’m sure there’s a lot more that I’m not thinking about right now. Is there any other way that you can think of that people are going to be making money with real estate in the metaverse that we haven’t covered yet?
There’s there’s one thing that I also wanted to mention, the highest valued NFT just sold in the Sandbox in the past couple weeks, it was a virtual mega yacht and it sold for $650,000.

A mega yacht that doesn’t exist?
Yes. It has multiple floors, it has a pool onboard, a DJ booth, so people are going to host events on it. That’s an in game asset where owner is going to be leasing it out to people to host events and make passive income off of it. I think in the next 5-10 years, probably even sooner, we’ll look back and say, Wow, I wish I would have bought that virtual mega yacht for $650k, what a steal. It’s hard to believe and hard to see now, but that’s another example of an in game asset transport vehicle that exists as an NFT. So just like the land, just like the sword, just like the car, you can easily sell it on the NFT marketplace for profit.

Fascinating. I’m sure there will be plenty more topics to discuss in this space. Is there anything else that we haven’t covered that you think is important for our audience to know right now?
I would just encourage everyone to start looking into this, do your research. It’s very easy to set up an account on the Sandbox and in Decentraland, create your own avatar, start exploring and start walking around. Look at their marketplaces. See what’s for sale, how much it costs, download a digital wallet, get a MetaMask, or Coinbase wallet, or a number of other wallets. But MetaMask is the most popular one. Start getting familiar with it, because this is the future. The opportunities are massive. We’re still super early in the space. And I think virtual real estate will be in very high demand over time. I personally think that it’ll be worth more than real world real estate at some point in the future.

Yep, this can very likely be like Bitcoin is today, what it was 10 years ago. So everybody listen up, pay attention, learn and never forget that you learned here first.